Once a dark horse in China’s fiercely competitive toy industry, Hong Kong-listed Pop Mart opened its first U.S. pop-up store on June 15, in Costa Mesa, California, the latest in a series of expansions outside the home market. It is unknown if the temporary retail place will become permanent.

Two months ago, Pop Mart opened a store in New Zealand – its first in Oceania – after launching its first European store in London in January.

Despite the aggressive moves into international markets, Pop Mart is far from its glory days this time last year. Its stock closed at HKD 37.3 on June 29, down by nearly 50% from HKD 73.6 from a year ago.

Pop Mart is known for its “blind box” sales model, in which customers pay a fixed price, usually ranging from RMB 59 to 99 ($8.8 to 14.8), for a sealed box without knowing the exact contents inside. It could be any figurine from the company’s popular toy collections.

To cooler-headed observers, it is all a matter of probability. For example, to collect a whole set with six different figurines, the chances of having to buy only six boxes to collect all the toys are as low as 1.54%, which means diehard fans and collectors may need to buy a dozen more boxes to complete the collection.

In January, fast food giant KFC teamed up with Pop Mart in a highly publicized promotion campaign. One enthusiastic diner splashed out RMB10,494 ($1,650) on 106 KFC meals just to collect all six Pop Mart figurines that came with the food, according to the China Consumers Association.

China’s quirk–loving, thrill–seeking Gen-Z consumers have made the “blind box” model a runaway success in the last few years. Pop Mart raised $676 million in an initial public offering(IPO) in December 2020, giving the company a valuation of $7 billion ahead of the trading debut.

(Pop Mart’s most popular toy figure, “Molly,” in its costly NBA Collection. It costs RMB 499 ($74.5) per figurine, as shown on Pop Mart’s online shop on Taobao. Molly created a revenue of more than RMB 705 million ($105 million) in 2021, becoming the company’s most profitable product so far, according to its annual report. Photo Courtesy of Pop Mart’s Taobao shop.)

The company took off so fast that a great many investors missed the opportunity of private equity investment, which was quite regrettable for investors, according to Francis Young, a Chinese investor and analyst with a decade’s experience in China’s technology and consumer markets.

“When a large number of investment companies had not yet figured out [its success] and to get on board, Pop Mart no longer needed private equity financing. It launched and completed an IPO in Hong Kong in a swift manner, a move that left many investors regretful,” Young replied via text to questions by TechTechChina.

Young believes Pop Mart still faces quite a challenge to replicate its success overseas. Localized and tailored business models are key, he said.

Justin Moon, the company’s Vice President in charge of overseas business, expects its overseas revenue to outshine domestic market contributions in the long run. The company has had 20 outlets outside the Chinese mainland, including the newest pop-up in California. It plans to build a total of 40 to 50 overseas outlets this year, according to the Financial Times. The company’s 2021 annual report shows that revenue from outside the Chinese mainland increased by 85.2% in value compared to a year before. However, the overseas revenue still accounted for only 3 percent of its total revenue – a long way to go to reach Moon’s long–term goal of over 50 percent. 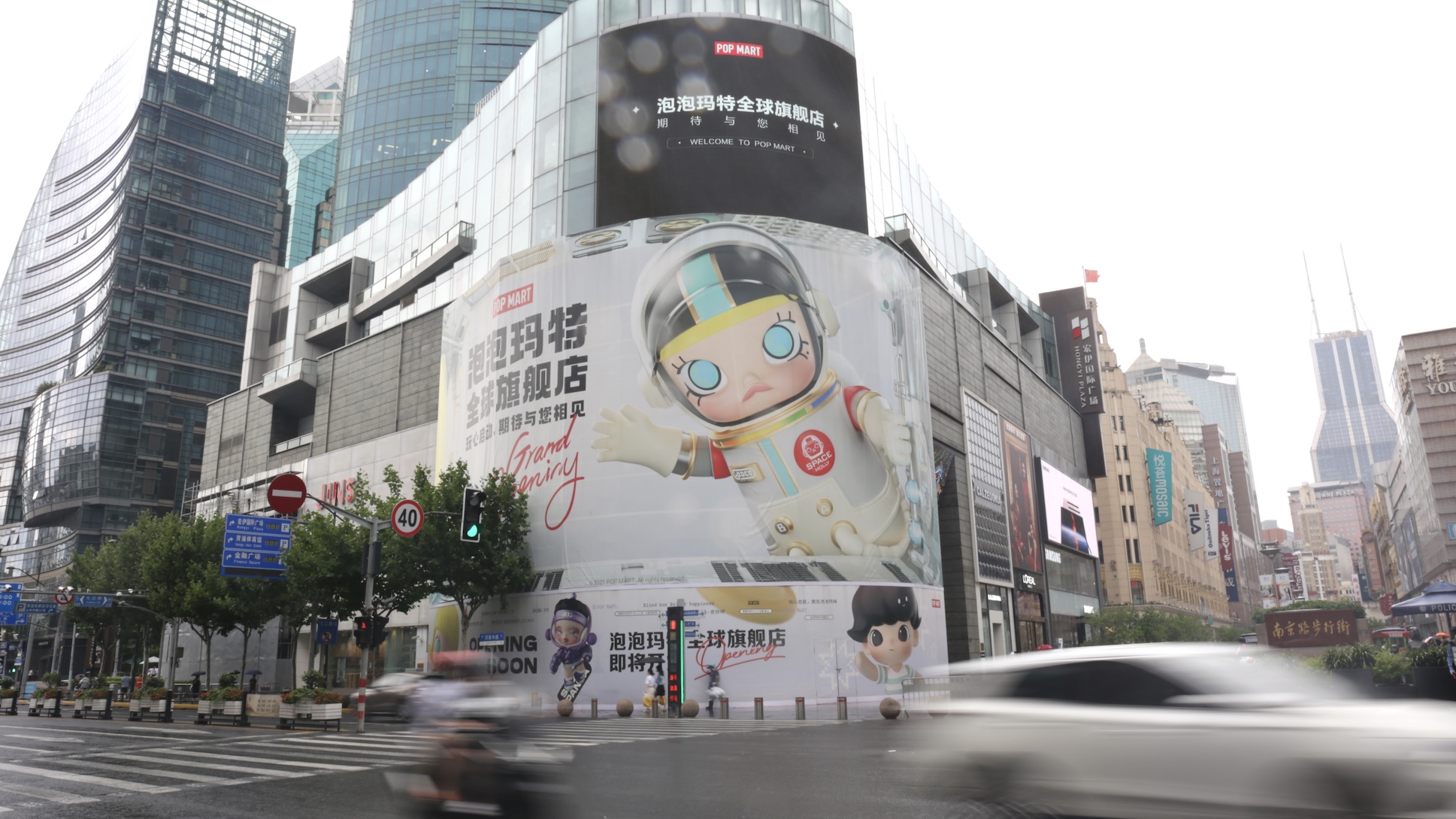 (Photo taken on June 24, 2022. A Pop Mart store opening soon at one of the busiest streets in Shanghai. Zhixin Wan/TechTechChina)

Pop Mart launched its global expansion strategy at the end of 2018 and is now present in more than 20 countries and regions around the globe. In 2020, 80% of its overseas sales were from Asia and Southeast Asia. Now it has set its sight on the North American and European markets for further growth.

While setting the goal high, Moon knows clearly how crucial localization is for Pop Mart to succeed.

“Culture, values, and perceptions of art vary in every corner of the world. In this context, it is necessary to build a strategic plan to expand our reach,” Moon said.

What comes after the blind box craze?

Pop Mart has undoubtedly secured its position as the frontrunner in China’s still booming “blind box” toy market. But what happens when the market frenzy dies down, which will probably happen eventually?

Pop Mart’s success has also come with growing pains: Soon after its tie-up with KFC in January 2022, the fast-food giant received harsh criticism from the Chinese authorities for the food waste and overspending it fueled. The quasi-official China Consumers Association called for public boycott against behaviors such as “blind consumption, impulsive consumption, and overspending.”

In its annual posting about yearly complaints, the China Consumer Association blasted the “chaotic expansion” of the blind box industry, recommending tighter regulation on the sales and pricing of blind boxes.

For now, it appears Pop Mart’s continued success and the fate of the blind-box industry it championed hangs in the balance as the market anxiously awaits stepped-up regulatory measures from the government. As Pop Mart tries to secure its domestic market and expands overseas, a revamped marketing strategy is crucial for its future.

The company knew it all along, according to Young, that the blind box frenzy is not sustainable, and that it must not stop creating adored toy figurines like Molly.

“That is why Pop Mart never highlighted the success of its blind box model in its financial reports. Instead, the company positioned itself as an Intellectual Property (IP) marketing platform, a pop culture entertainment company,” Young said. “To promote the globalization of China’s pop culture entertainment is the story Pop Mart is trying to sell.”

As Young put it, when the once disruptive and revolutionary marketing model of “blind box” faces tighter regulation or becomes a cliché, can Pop Mart still claim top dollar from consumers with sensational successes the way its Molly figurines did?

The question remains unanswered since 2017, before all the craze started, said Young. And time is running out fast for the toymaker to yield a satisfactory solution.

Vice president of JD.Com pours millions into research and tries on dozens of new medicines to cure disease 

How I Became a “Charity Detective” in a Rural Chinese Town 

Sign up for our weekly newsletter to receive exclusive news & articles about what’s happening in tech in China.

Our Spring Sale Has Started

You can see how this popup was set up in our step-by-step guide: https://wppopupmaker.com/guides/auto-opening-announcement-popups/